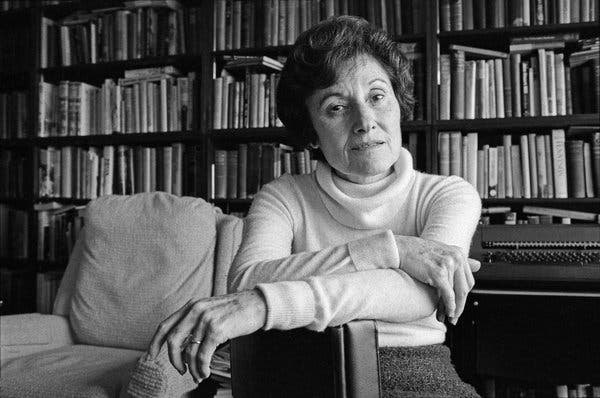 “She loved and revered books and education…she was a woman of ‘moral gravitas.’” Janice Shaw Crouse

“As a wife, mother, and homemaker, she rejected ‘the snobbery of the cultural elites and narcissism in all its forms…values that prevailed in her personal life: work, thrift, temperance, self-discipline, cleanliness, moderation, and respect for tradition.” Ibid

In his City Journal tribute to Gertrude Himmelfarb — who recently died at age 97 — Myron Magnet called her “our foremost historian of ideas and one of the nation’s greatest historians of any stamp.”  He also paid tribute to Himmelfarb as a scholar of highest distinction in an era of “wide-ranging social, political, cultural and ethical” erudition.  She is considered by many to be among the most influential intellectuals of her time — including Lionel Trilling, Daniel Bell, Roger Shattuck, Jacques Barzun, Irving Kristol, Philip Rieff, and others.  In addition to her “brilliant and eminent” career, Daniel Bell, a friend who knew them well, remarked that the Kristols’ marriage was “the happiest of their generation.”  Himmelfarb and her husband, Irving Kristol, were known for their “long and intense disputes,” their “intellectual jousting matches,” and brilliant repartee as they discussed issues.  Adam Keiper’s brilliant essay described the Kristols as having enjoyed “a long and fruitful partnership.  She advised him on his magazines and other projects, he helped her edit and think through her many books.”  Keiper reported that Irving once wrote that he and Bea were “intellectually twinned” in that they pursued “different subjects while thinking the same thoughts and reaching the same conclusions.”

How sad that women of the ilk of Gertrude Himmelfarb weren’t media icons and held up as role models for young women.  Known simply as Bea Kristol among her friends, she was, according to David Brooks’s wonderful essay in The Atlantic, an amazingly warm and vibrant personality who “listened more than she spoke.”  She represented the best of both worlds by balancing her outstanding professional career with her fulfilling and meaningful personal life.  As a wife, mother, and homemaker, she rejected “the snobbery of the cultural elites and narcissism in all its forms” for the more “bourgeois values that prevailed in her personal life: work, thrift, temperance, self-discipline, cleanliness, moderation, and respect for tradition.” END_OF_DOCUMENT_TOKEN_TO_BE_REPLACED

“’As is the case with same-sex ‘marriage,’ children are again victims.”  Trevor Thomas

“Not only children, but parents of vulnerable and deceived children are victims as well.” Ibid

While listening to the Rush Limbaugh show this past Monday, I heard guest host Todd Herman interview an Australian pediatrician and professor on the issue of gender dysphoria and children.  Near the end of the enlightening interview, in which the good doctor detailed the “serious and irreversible damage” done to gender-dysphoric children given radical surgeries and hormones demanded by the perverse LGBT agenda, Mr. Herman asked the important question: “Why?”

I don’t recall the exact wording of Mr. Herman’s question, and RushLimbaugh.com does not provide a transcript for guest-hosted shows, but it was something along the lines of this: why have so many decided that the solution for children — children! — suffering from gender delusions is disfiguring surgeries and dangerous hormone treatments?  The doctor didn’t have a good answer ready, but I think I know who’s really behind this evil and what the endgame is here.

First of all, let it be noted the lightning speed in which we’ve descended down this wicked slope.  With nothing in science or morality to back the notion that “gender is a spectrum” or that one can actually “transition” from one sex to another, in less than a decade we’ve gone from the foolish and evil notion that marriage is whatever we define it to be to sex (gender) is whatever we define it to be.  As is the case with same-sex “marriage,” children are again victims.

Not only children, but parents of vulnerable and deceived children are victims as well.  In early 2019, in Public Discourse, the journal of the Witherspoon Institute, five mothers anonymously published their concerns over their supposed “transgender” children.  The first mother wrote: END_OF_DOCUMENT_TOKEN_TO_BE_REPLACED

“Yet, according to some polls, a hair-raisingly high percentage of America’s youth think communism is good.” David L. Rosenthal

An end to tolerance

The National Anthem commemorates the struggle of America to remain free from despotic oppression by a foreign power from which America had freed itself only a few decades before, after which the United States Constitution was ratified, including the Preamble and the Bill of Rights, cornerstones of American exceptionalism, defining not exactly what America had become, but what America should become.

Today, after 24 decades of history and social turmoil, and struggle to improve social conditions in order better to reflect adherence to the principles expressed in the Preamble, America is at a crossroads, faced on the one hand with the option to continue down the road of respect for individual rights and the great purposes for which America was founded, and on the other hand with the option of permitting Communist madmen to transform America into an enslaved nation oppressed by totalitarian brutes.

Communist madmen such as Bernie Sanders want you to accept that just one more attempt at communism will magically lead to its successful administration for the first time in its history of producing genocide, poverty, and degradation of society. Elizabeth Warren and Michael Bloomberg are not far behind Bernie in their insane initiatives to destroy freedom, rights, and prosperity. END_OF_DOCUMENT_TOKEN_TO_BE_REPLACED