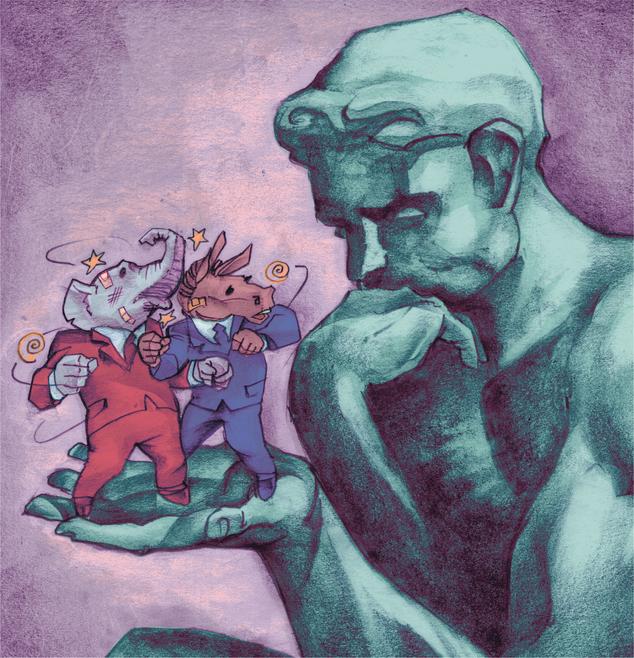 “Culture, not politics, determines the success of a society.” Daniel Patrick Moynihan

“In a sort of ghastly simplicity, we remove the organ and demand the function.  We make men without chests and expect of them virtue and enterprise.”  C. S. Lewis

Daniel Patrick Moynihan famously observed that conservatives recognize “culture, not politics, determines the success of a society,” while liberals believe “politics can change a culture and save it from itself.” Yet today’s conservatives and liberals both tend to demand cultural results from political and economic systems. Liberals invest ever more moral meaning into politics, and conservatives do the same in response to a rapidly changing culture seemingly slipping from their grasp.

Conservatives see liberal elites time and again attacking the foundations of traditional culture, and then be shocked by the predictable results. “In a sort of ghastly simplicity we remove the organ and demand the function,” wrote C.S. Lewis in “The Abolition of Man.” “We make men without chests and expect of them virtue and enterprise.” The cultural elites mock and undermine faith, traditional family, patriotism and shared history—then concoct new political programs to deal with the resulting mess.

Conservatives are angry at these elites for taking sledgehammers to the nation’s core, and they see society in a crisis. The first step to recovery, in some conservatives’ view, is to go after the people who wield the sledgehammers. They thus turn to populists like Donald Trump, ignoring his failure to live up to their ideals in his personal life, because he promises to fight the elites for them.

Liberals, meanwhile, invest their latest political proposals with soaring rhetoric meant to invoke previous historic achievements and recapture a lost sense of meaning. They explicitly compare implementing their Green New Deal to the original New Deal, the nation’s mobilization for World War II, and landing on the moon. These were monumental accomplishments that inspired and united the nation behind their elected leaders. Liberals want to believe rising carbon-dioxide levels amount to the same sort of challenge so they can reorder the nation’s economy, energy markets and transportation system—and they can’t understand why voters aren’t buying it.

Modern liberals resent society’s inheritance of a Reagan-inspired distrust of big government, and to circumvent that they constantly declare new existential crises that transcend all other considerations to justify massive federal responses. It is no longer enough to clean up the environment incrementally—the world now faces imminent apocalypse from climate change. Expanding government health-care coverage via Medicare for All and compensating victims for past and current discrimination are moral imperatives. There is no time to wait, no price too high, no competing goal worth weighing. As conservatives turn to Mr. Trump to fight for them, liberals turn to their own prophets of doom—Alexandria Ocasio-Cortez, Bernie Sanders, Elizabeth Warren and others.

While they see the world from opposite viewpoints, liberals and conservatives share a sense of urgency that makes compromise and policy success elusive. Both sides seem to be growing increasingly frustrated and impatient with the inability of government to accomplish their ambitious goals, and are thus more open to breaking with precedent. What were once unthinkable breaches of protocol in behavior and ideology are now celebrated by partisans on both sides. The president’s crude tweets and Barack Obama’s overreaching use of his pen are cheered by their supporters as proportionate responses to alarming circumstances.

Liberals are less scared of the word socialism, and are not content simply to raise taxes on the wealthy to strengthen the social safety net. Rather than subsidizing health care for the uninsured, as Mr. Obama did, they now want to eliminate private insurance.

In their panic, some conservatives are more open to questioning their previous embrace of free markets. No longer content with capitalism, they wonder why their preferred economic system has not done better at preserving American families and communities. These voters embrace Mr. Trump’s tariffs over free trade, hoping he can save their jobs. Many wonder if cutting taxes is sufficient, given the liberal assault on religious freedoms and traditional values. These conservatives thus resent Republican elites who admonish them to focus solely on economic prosperity and leave divisive cultural concerns outside the political sphere.

For conservatives, the lesson is plain: Render unto Caesar only the things that are Caesar’s. That’s not a call for conservatives to abandon the political battlefield, as they have sometimes been tempted to do, but rather to preserve and respect the traditional role of private initiative, charities, churches and civic organizations—in other words to remember, as Moynihan had it, that culture, not politics, determines the society’s success.

Mr. Jindal served as governor of Louisiana, 2008-16, and was a candidate for the 2016 Republican presidential nomination.