“Richard Rorty further defines his teaching goal as enticing students to read Darwin and Freud ‘without disgust and incredulity’ and to ‘arrange things so that students who enter as bigoted, homophobic, religious fundamentalist [i.e., Christian students] will leave college with views more like our own.’” David A. Noebel, Understanding The Times: The Collision of Today’s Competing Worldviews, p. 4

“Rather, I think these [Christian] students are lucky to find themselves under the benevolent Herrschaft [teaching] of people like me [Rorty], and to have escaped the grip of their frightening, vicious, dangerous parents.” Ibid

“What united all these seemingly disparate philosophers and movements is that they were all, according to [Professor Stephen] Hicks, left-wing (usually Trotskyist/communist/Maoist, etc.).” Paul Austin Murphy

Professor Stephen Hicks’ book, Explaining Postmodernism: Skepticism and Socialism from Rousseau to Foucault (2011), is used as a springboard in this piece. In other words, this ain’t a book review.

In terms of autobiography, Stephen Hicks is a very rare animal indeed: he’s a right-wing professor at an American university. He teaches at Rockford University; where he also directs the Center for Ethics and Entrepreneurship.

When Socialism was Discovered to be Dead or Dying

Professor Stephen Hicks’s central thesis on postmodernist intellectuals is that they recognised that socialism was dead or dying (in the late 1960s,1970s, and 1980s) and thus decided to do something about it. What did they do? They developed their own distinctive “sceptical” (yet still left-wing!) philosophies. In 1974, for example, Herbert Marcuse was asked whether he thought the New Left was dead. Hicks quotes Marcuse as replying: “’I don’t think it’s dead, and it will resurrect in the universities.’”

He was dead right about that!

Of course, we can ask Hicks if it really were that simple. Was it really all about revivifying socialism/communism or were there (at least some) other factors involved? Nonetheless, that project might have been in the unconscious minds of these thinkers. Perhaps their upbringings in the theology of socialism left an indelible mark on their psyches; as religious upbringings tend to do.

It can be said that sceptical epistemology, deconstruction, etc. are all means to achieve the political ends which can’t be sustained by truth, evidence and argumentation. Thus, if all this is taken as given (as true!), then one’s “readings” and epistemologies give one free reign to believe what’s required in order to further a political agenda/goal.

If we can be more specific about what postmodernists believe (even if in very broad terms), we can cite the following. Take logic. It’s artificial, serves power and is anti-human (Heidegger, Levinas, etc.). Science is theory-laden and “underdetermined by the evidence” (as often said in the philosophy of science). Truth is a “tool of power” (Foucault) and is specific to different “language games” (Wittgenstein, etc.) or “phrase regimes” (Lyotard).

Thus, if, as Fredric Jameson put it (as quoted by Hicks), “all life is political” (therefore all philosophy is also political), then one political tool (if in the guise of philosophy) will be rhetoric (“literature”, in Derrida’s case). That means that if no “discourse” reveals the truth (or even attempts to do so, in postmodernism’s case), then why not bite the bullet and indulge in an even purer more extreme (philosophical) rhetoric — even if in a poetic and/or pretentious guise?

Thus, as Hicks puts it, “regular deployments of ad hominem, the setting up of straw men, and the regular attempts to silence opposing voices” aren’t only legitimate, they’re to be encouraged (at least if you’re on the same side). Hicks cites the example of Stanley Fish who “calls all opponents of racial preferences bigots and lumps them in with the Ku Klux Klan”. He also cites the radical feminist Andrea Dworkin. She “calls all heterosexual males rapists and repeatedly labels ‘Amerika‛ a fascist state”. (So too does Chomsky!) All this, therefore, is simply a variant on the many Leftists who suffer from Tourette’s syndrome when they repeatedly and uncontrollably shout “racist”, “bigot”, “xenophobe”, “Nazi”, etc. at literally anyone who dares to opposes them.

“They were mostly civilian volunteers known as La Brigada 2506, an almost precise cross-section of Cuban society of the time.”

“They fought magnificently and were not defeated…They were abandoned on the beach without the supplies and support promised by their sponsor, the Government of the United States.” Jack Hawkins

THE BAY OF PIGS 56 YEARS LATER

When U.S. airstrikes could have destroyed a terrorist regime, freed a nation and altered history.

“Where are the planes?!” kept crackling over U.S. Navy radios exactly 56 years ago this week. The U.S. Naval armada (22 ships including the Carrier Essex loaded with deadly Skyhawk jets.) was sitting 16 miles off the southern Cuban coast near an inlet known as Bahia de Cochinos (Bay of Pigs). The question — bellowed between blasts from a Soviet artillery and tank barrage landing around him — came from commander Jose San Roman.

“Send planes or we can’t last!” San Roman kept pleading to the very fleet that escorted his men to the beachhead (and sat much closer to them than the U.S. destroyers Porter and Ross sat to the Syrian coast this week.) Meanwhile the Soviet artillery barrage intensified, the Soviet T-34 and Stalin tanks closed in, and San Roman’s casualties piled up.

By that date the terrorists who ran (and still run) Cuba had been operating terror-training camps for two years, had kidnapped, tortured and murdered dozens of American (to say nothing of tens of thousands of Cubans.) A year later they wantonly brought Western civilization a whisker from nuclear destruction. If foreign terrorists ever merited a MOAB, it was these– based 90 miles from U.S. shores. END_OF_DOCUMENT_TOKEN_TO_BE_REPLACED 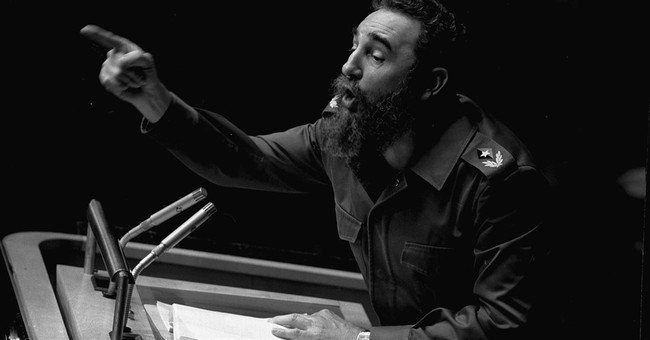 In a recent interview CBS’ Ted Koppel denounced Sean Hannity as “bad for America” because, “You have attracted people who are determined that ideology is more important than facts.”

Any chance that an agent-of-influence for a totalitarian regime might “put ideology over facts?”

Any chance that an agent-of-influence for a mass-murdering, terror-sponsoring regime that came within a whisker of nuking America, whose agents managed the most damaging espionage against America in recent history, and whose dictator (only last year) declared America the “main enemy!”—any chance employing such a “news analyst” might be “bad for America?”

Important background: Sweig’s identifier Lieut. Col. Simmons helped end the operations of 80 enemy agents against America, some are today behind bars. One of these had managed the deepest penetration of the U.S. Department of Defense in U.S. history. The spy’s name is Ana Belen Montes, known as “Castro’s Queen Jewel” in the intelligence community. “Montes passed some of our most sensitive information about Cuba back to Havana,” revealed then-Undersecretary for International Security John Bolton.

Today she serves a 25-year sentence in federal prison. She was convicted of conspiracy to commit espionage, the same charge leveled against Ethel and Julius Rosenberg, carrying the same potential death sentence for what is widely considered the most damaging espionage case since the “end” of the Cold War. Two years later, in 2003, Chris Simmons helped root out 14 Cuban spies who were promptly booted from the U.S.