“The U.S. has many of the best [leftist] universities in the world, but according to a new global list, it doesn’t have the best.” Beckie Strum

The U.S. has many of the best universities in the world, but according to a new global list, it doesn’t have the best.

The University of Oxford, the oldest in the English-speaking world, became the first school outside the U.S. to take the top spot in the World University Rankings, which also show Asian universities moving up. Photo: Getty Images

The University of Oxford, the oldest in the English-speaking world, took the top spot in the latest World University Rankings, released annually by Times Higher Education. The English university dating to 1096 dethroned the California Institute of Technology, a small, private school in Pasadena that had ranked No. 1 for five-straight years, according to Times Higher Education, a London magazine that tracks higher education.

This is the first time a university outside the U.S. is No. 1 in the list’s 13-year history. This year’s list also underscores strengthening university systems in Asia as schools in China and Hong Kong have risen up the ranks, some by double digits.

Besides the Oxford-Caltech flip flop, the top of the list remained mostly the same as last year. Stanford University came in third, then the University of Cambridge, another U.K. institution founded in medieval times. The Massachusetts Institute of Technology came in fifth, just ahead of its Cambridge, Mass., neighbor, Harvard University, the top Ivy League school on the list.

WUR tends to focus on research, counting metrics like the number of citations and publications by a university’s scholars and the amount of research funding attained in a given year. The list also takes reputation into account by surveying some 20,000 leading scholars to identify top schools, said Phil Baty, rankings editor at Times Higher Education.

Oxford’s boost came from an exceptionally strong research income and global collaboration. The university secured record research income of £522.9 million, or $679 million at today’s exchange rates, from external funders in the 2014-2015 academic year, said Louise Richardson, vice-chancellor of Oxford.“Industry, charities, health organizations and many other funders are all keen to invest in Oxford research,” said Louise Richardson, vice chancellor, chalking up the record funding to the strength and talent of the university’s scholars. 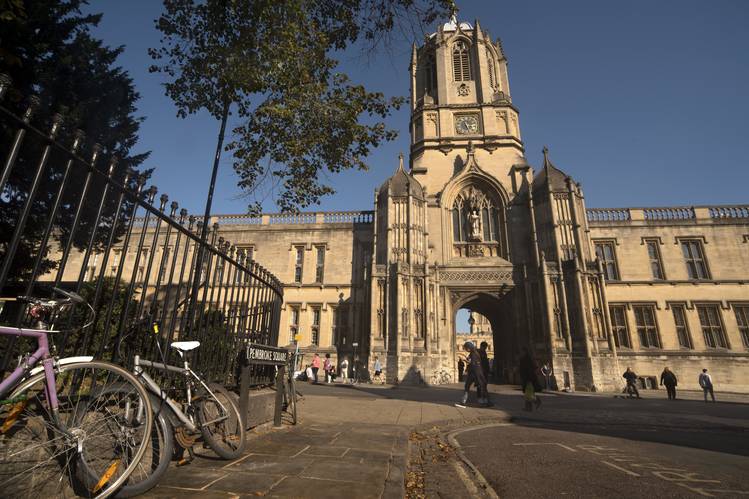 Further down the list, Asian universities have soared past some of the most prestigious institutions in Europe and the U.S. The number of Chinese universities in the top 200 doubled to four this year. China’s top school, Peking University (No. 29), a public school in Beijing with about 30,000 students, ranked above New York University (No. 32).

Over the past eight years, China has invested the equivalent of roughly $33 billion in developing a group of elite universities through two government initiatives.

“This is meant to be the year that China overtakes the U.S. on science research and science publication,” said Mr. Baty, adding that the country is already leading the world in the number of scientists.

China’s Tsinghua University (No. 35), another large, public university based in Beijing, ranks ahead of Ivy League school Brown University. The University of Hong Kong (No. 43) and Hong Kong University of Science and Technology (No. 49) also come in ahead of Brown, which ranks 51.

Part of China’s rise has to do with schools putting more weight on surveys like Times Higher Education’s world rankings, and efforts to lure back reputable Chinese and Chinese-American researchers from American universities, said Mr. Baty.

Another government initiative aims at making six Chinese universities leading global institutions by 2020—some of them in the world’s top 15 by 2030, said Mr. Baty.

The government has focused particularly on increasing science and technology education and research. “The readjustment of university faculties and specialties is the vital step in the transformation process,” Yuan Guiren, China’s former education minister, said in March. “Some specialties, such as engineering and science which cost more than the humanities, should be increased to match the country’s economic and industrial structures.”

The highest-ranked university in Asia is the National University of Singapore, a school of about 38,000 students that offers degree programs heavily subsidized by the city-state’s government, according to its website. At No. 24, that school ranks a slot above the London School of Economics and Political Science.

Meanwhile, U.S. institutions kept their dominant presence on the list.

Amplification:
This article was updated to include ownership information about Times Higher Education. (Sept. 22)

Write to Beckie Strum at Beckie.Strum@wsj.com

“At least nine states will charge ahead with marijuana initiatives on ballots in November—a record number—despite the federal government’s decision not to loosen restrictions on the drug, underscoring the precariousness of any type of legal recognition.” Andrea Noble

“The Drug Enforcement administration last week denied requests to change the legal classification of marijuana—it’s classified as a Schedule I drug alongside heroin and LSD—shooting down advocates’ push to get the drug federally approved for medical purposes.” Ibid

At least nine states will charge ahead with marijuana initiatives on ballots in November — a record number—despite the federal government’s decision not to loosen restrictions on the drug, underscoring the precariousness of any type of legakrecognition.

In five states — California, Arizona, Nevada, Massachusetts and Maine — voters will be asked whether they want to legalize recreational use of marijuana.

Meanwhile, those in Florida, Arkansas and North Dakota will vote on starting full-fledged medical marijuana programs, and Montana voters will de­cide whether to loosen restrictions on their state’s existing program.

Voters in Missouri, Michigan and Oklahoma could see medical marijuana initiatives on the Nov. 8 ballots if supporters produce enough petition signatures. Initiative supporters in Missouri and Michigan are embroiled in court battles over sig­natures that were thrown out and left them short of the thresholds required. Officials in Oklahoma are counting signatures turned in last week.  Paul Armentano, deputy director of the National Organization for the Reform of Marijuana Laws, said the number of states voting on marijuana initiatives is unprecedented. END_OF_DOCUMENT_TOKEN_TO_BE_REPLACED

“CNN paints the poor old boy as a victim.” Ibid

“No serious Cuba-watcher expects a network bestowed a Havana bureau by KGB-trained apparatchiks to even feign honesty, or even play-act their professed duty: ‘to comfort the afflicted and afflict the comfortable.’” Ibid

When Fidel Castro celebrated his 90th birthday last week, CNN was the eager first-responder.  “Survivor Turns 90,” gushed CNN’s perky Patrick Oppmann from Havana. “More people have tried to murder the world’s most famous socialist than any man alive, according to the 2006 British documentary “638 Ways to Kill Castro.”

Got it? CNN paints the poor old boy as a victim.  And gosh! What in the world would cause anyone to wish harm upon this inoffensive health-care provider?  After all, his only offense was to dispossess mobsters and provide free and fabulous healthcare and education to his formerly wretched and exploited countrymen.

The question above pretty much sums up the CNN story. The primary source for the British “documentary” — and for CNN’s recent “report” by the way — is Fabian Escalante, one of Castro’s oldest and most trusted KGB-trained intelligence officers. END_OF_DOCUMENT_TOKEN_TO_BE_REPLACED