Here’s a recent statement frequently suggested by leftist academics, think tank researchers and policymakers: “People were not just struggling because of their personal deficiencies. There were structural factors at play. People weren’t poor because they made bad decisions. They were poor because our society creates poverty.” Who made that statement and where it was made is not important at all, but its corrosive effects on the minds of black people, particularly black youths, are devastating.

There’s nothing intellectually challenging or unusual about poverty. For most of mankind’s existence, his most optimistic scenario was to be able to eke out enough to subsist for another day. Poverty has been mankind’s standard fare and remains so for most of mankind. What is unusual and challenging to explain is affluence — namely, how a tiny percentage of people, mostly in the West, for only a tiny part of mankind’s existence, managed to escape the fate that befell their fellow men.

To say that “our society creates poverty” is breathtakingly ignorant. In 1776, the U.S. was among the world’s poorest nations. In less than two centuries, we became the world’s richest nation by a long shot. Americans who today are deemed poor by Census Bureau definitions have more material goods than middle-class people as recently as 60 years ago. Dr. Robert Rector and Rachel Sheffield give us insights in “Understanding Poverty in the United States: Surprising Facts About America’s Poor” (9/13/2011). Eighty percent of poor households have air conditioning. Nearly three-fourths have a car or truck, and 31 percent have two or more. Two-thirds have cable or satellite TV. Half have one or more computers. Forty-two percent own their homes. The average poor American has more living space than the typical non-poor person in Sweden, France or the U.K. Ninety-six percent of poor parents stated that their children were never hungry during the year because they couldn’t afford food. How do these facts square with the statement that “our society creates poverty”? To the contrary, our society has done the best with poverty.

Maybe the professor who made the statements about poverty — who, by the way, is black — was thinking that it’s black people who have been made poor by society. One cannot avoid the fact that average black income today is many multiples of what it was at emancipation, in 1900, in 1940 and in 1960, even though average black income is only 65 percent of white income. There is no comparison between black standard of living today and that in earlier periods. Again, the statement that “our society creates poverty” is just plain nonsense. END_OF_DOCUMENT_TOKEN_TO_BE_REPLACED 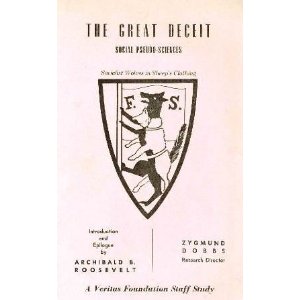 “Socialism likewise is reflected by many symptoms.  Perversion of law through our courts; treason in government; corruption and graft to attain power and wealth; mob rule in our streets; corrupting the clergy and the pulpit as political agents for leftist atheism; and the steady erosion of the moral s of our youth is symptomatic of the insidious influence of leftist manipulators.”  Archibald B. Roosevelt, The Great Deceit, p.336

“Almost everyone who cares earnestly about freedom is aroused against the Communists.  But it is not only the communists; it is in a more subtle way the socialists who are blocking the efforts of the free world to recover its poise and its once firm resistance to tyranny.”  Max Eastman, Reflections on the Failure of Socialism, p. 23; inThe Great Deceit, p. 333

“The American Civil Liberties Union had previously operated under the name of the National Civil Liberties Bureau, which gained prominence for ‘…attempting to influence the foreign policy of his country towards Soviet Russia.’  Chief organizers of the predecessor group were much well-known socialist as Norman Thomas, Jane Addams, A. A. Berle and Scott Nearing.”  The Great Deceit, Research Director Zygmund Dobbs, p. 328

“Wisconsin’s voters are poised to break new ground on the cultural front:  electing the first openly lesbian U.S. senator.  This would mark a watershed for the homosexual movement—and a major blow against traditional America.” Jeffry T. Kuhner

“The Badger state has become ground zero in the key battles of our time.” Ibid

“Every major religious faith—Christianity, Islam and Orthodox Judaism—teaches that homosexual behavior is immoral and unnatural.  This is not ‘hate speech’ or ‘homophobia.’  It is the natural moral order.”  Ibid

Wisconsin’s voters are poised to break new ground on the cultural front: electing the first openly lesbian U.S. senator. This would mark a watershed for the homosexual movement — and a major blow against traditional America.

The Badger State has become ground zero in the key battles of our time. The left’s desperate efforts to repeal Gov. Scott Walker’s fiscal reforms went down in flames. Wisconsin Congressman Paul Ryan has emerged as champion of the Tea Party. The Republican vice presidential nominee has made confronting our debt crisis a signature issue. When it comes to deficits, entitlement reform, curbing government spending and confronting out-of-control public sector unions, Wisconsin’s leaders are paving the way. Democratic Congresswoman Tammy Baldwin, however, is hoping to make a different kind of history. She wants to advance the destructive sexual revolution of the 1960s.   END_OF_DOCUMENT_TOKEN_TO_BE_REPLACED